I’ve recently finished Robert Graves’ novels about ancient Rome: I, Claudius, Claudius the God, and Count Belisaurius. I enjoyed all three, but Claudius the God was clearly the most exhausting and, at times, tedious in exactly the way that you suppose a dusty old historical fiction classic would be. But, on the whole, I am a completely satisfied customer.

And I’m also easily pleased: I’m on a pretty intense Roman history kick, so that strongly influences my judgement. For instance, I greatly enjoyed Robert Harris’s novelizations of Cicero’s life, Imperium and Conspirata, which I think many people find almost unbelievably boring. So bear that in mind when I praise Graves’ treatments of Claudius and Belisarius. But both are fascinating historical characters. And I already had a weird soft spot for Belisarius

I was introduced to Belisaurius by a (trashy?) series of alternate-history science fiction novels about his life (the series starts with An Oblique Approach, Drake & Flint, 1998), in which his freakish competence is explained by getting tips from a sentient crystalline entity from the extreme future, which is a really fun idea. 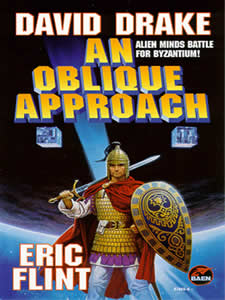 I really had a hoot reading this novel. But I had a hard time getting over the cover. That is some serious graphic design cheeze.(I can imagine Drake and Flint talking over beers: “Holy shit, that dude Belisarius was a good general! I mean, almost too good, right? It’s almost suspicious, y’know? Hey, wait a second, I think I just got an idea for several novels …”)

It’s hard to say how much I would have enjoyed what Graves wrote about Belisarius without that surreal introduction to the character. But it was really enjoyable comparing and contrasting such different accounts, which were nevertheless in sync in so many ways.

The Apotheosis of Martin Padway, by SM Stirling, is about a time traveller who arrives in Italy just before Belisaurius begins his invasion to bring the peninsula back into the Roman empire. Having just read the story of this campaign in lavish detail in Graves’ Count Belisarius, Padway’s adventures are so much more interesting as a result! I’m easily getting triple the intellectual pleasure out of the story thanks to this layering of perspectives. When you read history, the benefits accumulate!

I’ll definitely add more to this page as my obsession with Rome progresses.