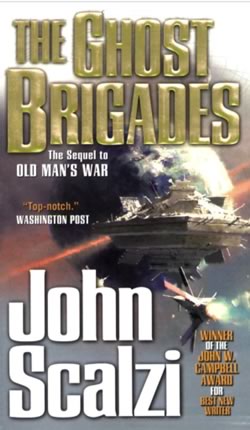 As in Old Man’s War, John Scalzi is relentlessly inventive and fun and somehow manages to make an awful lot of other excellent science fiction seem tired and old. He does it with an unusual balance of qualities rarely found in the same novel in this genre: the book has intellectual and emotional maturity, which usually happens in science fiction only at the expense of other elements of dick-lit, but the gear, guns and gore are still here, in (and on) the hands of really good characters. Some reviewers have complained that there’s too much homage here for true originality, but everything has been a remix for many years now, and Scalzi mixes well indeed.

Ghost Brigades is also unusual and praiseworthy as a sequel in that it blessedly advances the story without the need for ham-handed expositional review, or, God forbid, explanatory dialogue: “I don’t need to tell you this, but you certainly aren’t as handy as you were before the Badassians amputated your arm in the last book!” GB doesn’t need to remind you of much by any means, because it has its very own story. This is what I call a “character sequel,” in which the main connection with the first novel is just a character: John Perry is barely mentioned, but Jane Sagan’s story is advanced more than the plot, and she’s not even the protagonist.

I enjoy the photorealistic style, particularly in contrast to the campy and conspicuously make-believe prose of the Robert Buettner novels I finished last week. The content is superficially similar — grunts… iiin … spaaaaaace! — but also instructively different: Buettner builds his universe with Lego, Scalzi with steel and bone. If that sounds like high praise for Scalzi and a condemnation of Buettner, it’s not, but it certainly reveals my preference. I never liked impressionistic, painterly sci-fi art, either. (Ironically, that’s exactly what’s on the cover of this one.)