It’s time to play “How many calories is it really?” I’ve been buying the same sushi “Combo B” from a good hole-in-the-wall sushi joint for more than ten years now, Daikichi Sushi on Burrard (Google maps). It consists of a tuna roll, a salmon roll, and a California roll: 18 lean pieces, almost no sauce. It’s really quite good, especially for the price, which is why I keep ordering it, once or twice a week, for so long.

The chef knows what to do when I walk in! I’m sure he thinks of me as that Combo B guy.

cap:Sushi Combi B!*How many calories is it really? I’ve been wondering for a decade.

The Combo B has always seems like just a little bit too much too eat.

For a decade I’ve been eating these and thinking, “I probably really only need 12 pieces. Or 14.” But then I eat the whole thing. Every. Single. Time. Even through long, angst-ridden periods of otherwise highly disciplined dieting, I have eaten the whole thing. There’s some powerful food psychology going on there. I have marvelled at my own inability to save even a single piece for breakfast the next morning.

It’s not just that a lot of foods are surprisingly energy dense: it’s that those of us fighting the fat are relentlessly crafting complex and emotional assumptions to protect ourselves from the depressing truth that everything we ever loved is turning into a kind of countable poison. Above all, we constantly, conveniently “forget” how calorie-dense all the yummiest things really are. Do you know how many calories are in a tablespoon of peanut butter? It’s “nuts,” yukyuk. It amazes me every time I remind myself — and I’ve had to remind myself about a dozen times since about 2008. These “surprises” have come up countless times, and I’ve generally learned to expect the worst from every check. It’s almost always a rude shock, at odds with the effects of accumulated wishful thinking and layers of denial.

So it’s time to check the Combo B! Tonight I am dissecting it, weighing the rice and the fish and the avocado, and finding out once and for all: how many calories is it really?

Got a guess? Tune in next paragraph for the thrilling conclusion. 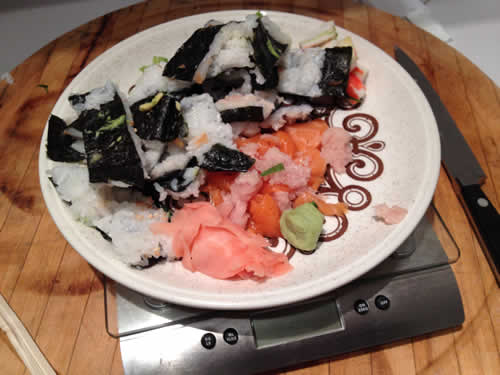 cap:Dissected Sushi Combi B!*After everything was piled back on the plate to eat. (It doesn’t taste as good this way. It was kind of like a sushi casserole.)

I’m thrilled to report that the Combo B’s energy content is actually not depressing. In fact, eating the whole thing has never been an unreasonable meal. It may even be the first ever good example of not tragically underestimating calories. Phew!

The combo weighs 408 grams, which is about 290g of rice and 85 of fish, with the small balance made up of avocado, cucumber and seaweed. Rice is pretty wet stuff, and averages only about 1.2 calories per gram. Fish and avocado are much more energy dense, of course, at about 1.4 to 1.5 calories per gram. I ignored the seaweed and cucumber and soy sauce (altogether they probably add up to less than a dozen calories).

It comes in just under 500 calories — which is really quite a modest meal.

I should have done this a long time ago. I could have spared myself years of uncomfortable guessing!

This calorie counting experiment coincides with a big personal weight loss milestone: I’ve ditched 25 pounds (11.3kg) of fat since last fall. After I first started trying to lose weight in about 2008, I suffered a series of humiliating defeats over a couple years. I got serious in the fall of 2010 and made my first genuine progres with the help of California trainer, Steve Moyer (The Moyer Method). I couldn't sustain it, but I learned a lot from it. I cooked up a refined plan and tried again … and finally had the right formula.